With the recent inauguration of many pedestrian streets, themed spaces, and night tours, authorities in Hanoi hope to give the city’s night economy a major boost.

Every evening at about 7:00 pm, Hanoi’s Old Quarter begins to bustle with tourists rushing between shops, food stalls, and entertainment venues.

The Old Quarter’s evening rush holds such a footing in Hanoian culture that nicknames have even been given to certain areas.

Weekends in the Old Quarter are especially busy, with groups of tourists and locals gathering in the area for entertainment and food, art performance venues, and karaoke parlors.

The pedestrian street around Hoan Kiem Lake has also been a major contributor to the economic development of the area.

In the first three years since its launch in 2016, the number of international visitors to Hoan Kiem rose 13-22.8 percent each year, and the number of stores offering tourism services in the vicinity jumped by 594.

In 2022, the city opened two additional pedestrian spaces, Trinh Cong Son Street, which was reopened after nearly two years of closures due to COVID-19, and Son Tay Old Fortress in Son Tay Town.

According to Nguyen Dang Thao, director of the management board of Duong Lam Ancient Village-Son Tay Old Fortress, the ancient fortress welcomes about 10,000 visitors on normal days and up to 15,000 visitors on weekends and holidays.

Hanoi is currently drawing up a pilot plan to develop the night economy in Hoan Kiem District.

As per the plan, six spaces have been designated as the driving forces of the city’s night economy development, including the pedestrian space around Hoan Kiem Lake and the adjacent areas; pedestrian spaces in the Old Quarter; the Phung Hung - Gam Cau culture, service, and trade space; the Tong Duy Tan - Cam Chi night-time pedestrian and food street; and the area from Hang Khay - Trang Tien Streets to the Hanoi Opera House, which is expected be turned into a promenade in association with a shopping center.

The capital city also seeks to develop pedestrian spaces in the Bac An Khanh – Splendora Urban Area in Hoai Duc District and around the Temple of Literature in Dong Da District.

These spaces, when in place, are expected to attract a large number of visitors and contribute to the development of trade and services in surrounding areas.

Dang Huong Giang, director of the municipal Department of Tourism, said despite no specific policies to boost the nigh-time economy, the sector has become a vital part of the city’s socioeconomic development.

Night-time economic activities should be developed in areas with high potential for service, trade, and tourism development.

Hanoi should enhance the planning of spaces for night-time economic activities, such as night markets, areas for the exhibition of products of traditional craft villages, and markets for handicraft, Giang added.

She proposed that specific regulations on night-time economic activities, such as operation times, venues and eligible products, as well as measures to handle violations, should be worked out. 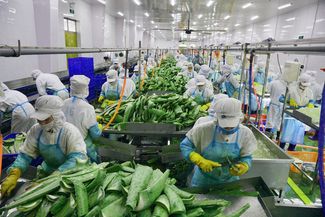