A Vietnamese and Colombian couple has spent the past five years dedicating their heart and efforts helping paralyzed dogs and cats walk again.

Before settling down in Vietnam, Colombian Oscar Fernando Ruiz Bonilla had been active in voluntary activities taking care of cats and dogs in his home country.

In 2015, he moved to Ho Chi Minh City, ran a restaurant in District 2, and often wandered around at night to in time rescue abandoned dogs and cats in his neighborhood.

After adopting his first paralyzed dog in Vietnam and naming him Motor, Bonilla started to make wheelchairs for immobilized dogs and cats.

For the past five years, Bonilla has spent time and effort taking training courses and learning to make wheelchairs from the Internet.

He studied a wide range of subjects from animal anatomy, to assembly techniques, 3D printing technology and a bunch of other courses before coming to practice.

“Of course, whatever you do, you start from the simplest solution,” Bonilla told Tuoi Tre News.

“After finishing my first simple wheelchair, I continued to improve it with the new techniques I learned from the courses.

“My product got better so that it could help dogs and cats move easily and comfortably."

The Colombian man is confident that his products are better than the others in the market, for he lives with and takes care of disabled animals every day.

“The most important thing for me is love, when you truly love them, you will know how to help them from suffering.”

Bonilla also donated the wheelchairs he made to owners whose pets are paralyzed but they could not afford to buy a wheelchair.

To the 44-year-old, nothing makes him happier than seeing the poor animals walk normally again thanks to the assistance of the wheelchairs he made.

In late 2017, Bonilla met the love of his life and married the Vietnamese doctor Tran Anh Thu.

With support from his wife, Bonilla decided to give up his restaurant business career to focus full-time on making wheelchairs for immobilized dogs and cats.

The two came to establish Forever Wheelchair in 2020, a company specializing in manufacturing wheelchairs for dogs and cats, the intellectual property of which was registered a year later.

According to Bonilla, what makes Forever Wheelchair’s products different is that they have shock absorbers which help animals move easier.

Thu said their company’s wheelchairs have been purchased by many foreigners in Ho Chi Minh City.

Besides running the company, Bonilla and his wife have also launched a fund called 'Happy Sell – Happy Share,' which donates part of the profit from wheelchair sales to animal rescue centers in the city.

The couple has also called for public support to give free wheelchairs to rescue stations and owners through a program called 'Thap Nang Cho Em' (Raise for Wheels).

So far, the program has helped around 300 dogs and cats walk with the assistance of wheelchairs.

“When I save a dog or cat, it’s not only the animal that feels alive again but also the owner,” Anh Thu shared.

“This makes me so proud of what my husband and I are doing."

The Vietnamese wife is also studying her second degree in veterinary medicine to gain more skills in caring for and rescuing sick dogs and cats on the street. 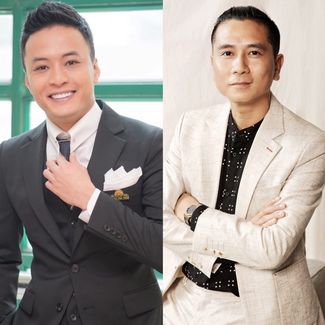 Instead of trading on their personal Facebook accounts or public pages, many vendors established private groups to avoid tax agencies’ attention