Thousands of people from the LGBTI+ community and their friends partook in a parade on Nguyen Hue Pedestrian Street in downtown Ho Chi Minh City on Saturday afternoon to mark this year’s VietPride, an annual event aimed at appealing for equality for LGBTI+ members in Vietnam.

The parade was part of a series of activities within the framework of this year’s annual LGBTI+ support VietPride, centered on Hon nhan khong khuon mau (Marriage Without Model), which was held in the southern city from September 18 to October 8.

Despite the rain, thousands of people lined the streets to attend the parade, which began at 4:30 pm.

On the same day as the parade, an indoor event was organized at the Royal Place Hotel in District 1 with numerous activities, including musical performances, bingo shows, film screenings, mini games, and workshop.

The event, decorated under the theme of a six-color rainbow flag, the symbol of the community, featured booths offering participants information or consultancy about the local LGBTI+ community, as well as selling handicraft products, clothes, and foods.

Profits will be donated to local LGBTI+ activities.

The event was attended by Vietnamese celebrities, such as singer Phuong Vy and Cece Truong.

One of the most highlighted parts of the event was a wedding drama performance by two couples of the same sex to support same-sex marriage in Vietnam.

Furthermore, the VietPride 2022 parade has provided a place for many LGBTI+ couples to express their heartfelt love stories, ranging from happiness to the tenacious struggle beyond prejudice to love and live on one's own desire.

A man also proposed to his boyfriend amidst the applause and blessings of thousands of people.

Nguyen Minh Tri, 18, said it was his first time to attend a large LGBTI+ event like this, and he had a lot of fun as well as indescribable emotions.

“The couples at the event have given me more faith in love,” Tri stated.

The annual VietPride was first organized in Hanoi in 2012 before growing to become a nationwide event. 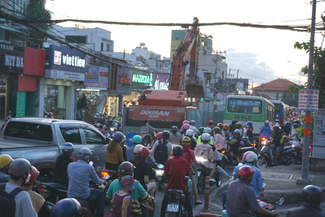 The project keeps causing a mess and congestion on the street 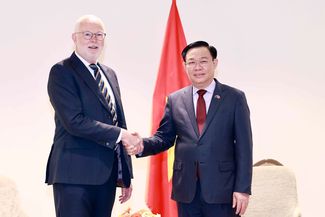