A house was constructed among large blocks of rock by a beach in the south-central Vietnamese province of Ninh Thuan to accommodate volunteers who come to help preserve local sea turtles, and its architecture has won the people’s admiration.

Named ‘Hero House,’ the work located on Thit (Meat) Beach where sea turtles often come to lay eggs in Nui Chua National Park was built in 2017 thanks to a budget of VND2.5 billion (US$107,842) donated by the community.

It has served as a shelter for experts from the park, as well as scientists and volunteers when they come to work on local sea turtle preservation.

Besides, the house has also provided ecological education for visitors with lots of books about sea turtle rescue and nature conservation available.

Built on a total area of 101 square meters, Hero House leans on a large cliff by the beach, protecting itself from strong storm winds while minimizing possible harm to the natural habitat.

The place designed by architect Nguyen Thu Phong is capable of accommodating 15 people at a time.

It is designed with many doors and windows to take advantage of natural light and ventilation while making it easier for those who stay inside to watch the beach and make a rescue for turtles in time.

The house is also equipped with eight solar panels producing 2 kWh of electricity in a day which is enough for daily activities such as operating lights and the refrigerator and pumping water.

To avoid interrupting the natural habitat of sea turtles, builders also made the lighting system as dark as possible while still being operational, with conservation staff rarely turning on the lights at night.

The staff have been so careful that they completely deactivated the two lights at the house’s eaves so that no one would make a mistake and turn them on in order not to disrupt the turtles.

Access to the house is only permitted by Nui Chua National Park’s office of sea conservation.

Currently, as COVID-19 has prevented volunteers from visiting the place, Hero House has only welcomed the community sea turtle protection team whose members are local fishermen to come and stand guard during the turtles’ egg laying season.

Getting to the house has become easier now after a concrete stairway connecting it with a forest above was constructed nearly a year ago.

Earlier, the builders and volunteers had to transport construction materials by boat to the location.

The coastal Nui Chua National Park is typical of the dry forest ecosystem in Vietnam and Southeast Asia, with many forest areas consisting of only rock mountains, bushes, and cactuses.

The beaches in the park have often seen several types of sea turtles coming to lay eggs including hawksbill sea turtles and green sea turtles.

The beach in front of the Hero House was called 'Meat' because local people used to catch turtles for meat when they flocked in large quantities to lay eggs in the past.

The habit had made the number of sea turtles sharply decrease over the years.

Thanks to a program to protect the turtles, the beach has since then been guarded strictly to create a safe environment for turtles to reproduce.

Every year, nearly 1,000 turtle eggs are protected and incubated naturally in Nui Chua National Park, and baby turtles are all released to the ocean. 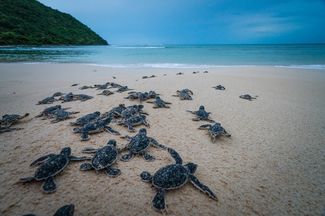