A man in Ho Chi Minh City has combined his passion for coffee and love of Vietnamese culture into a special drink at his café.

Cao Truong Minh, a 38-year-old architect in Binh Thanh District, has opened a coffee shop on Nguyen Huu Canh Street in the hope of promoting the image of Vietnam and its people through coffee.

One of his specialties is egg coffee with sketches featuring traditional Vietnamese images drawn on the surface.

The architect shared that it took him around three months to practice and master the skill of drawing on a cup of egg coffee.

A cup like that requires the barista around 20 minutes to half an hour to finish.

“I want to create a new look for the egg coffee which carries some features of our culture,” Minh said during an interview with Tuoi Tre News.

A cup of egg coffee, which is usually served hot, consists of a creamy whisked mixture of egg yolk, sugar, and sweet condensed milk on top of the hot black coffee underneath.

According to Minh, the hardest task is to make sure the whisked egg yolk layer is fluffy enough for him to sketch on.

“Egg coffee here is more special than some other places I have tried,” Nguyen Bao Ngan, a customer visiting Minh’s café, commented.

“Normally, shops only serve egg coffee with some shapes like hearts or smiley faces on them but here he even draws sketches of landscapes.

“It’s so much more eye-catching!

“The coffee stays hot all the time because it is served over a candle, so I can freely chit-chat with my friends without worrying that my drink is going to cool down."

Some landscape sketches on coffee by Cao Truong Minh: 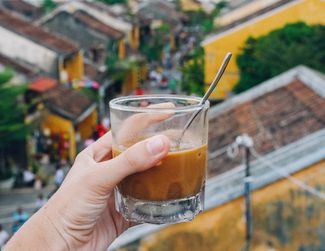 The line carries nearly 15,000 passengers on average per day