They are considered a true showcase of Ha Giang’s storied beauty.

The Ha Giang Loop has long been a favorite amongst motorbike-riding backpackers, but the establishment of the novel routes throughout the region will help to gradually open up the area to group tours and other visitors who prefer to travel by bus or car.

The area surrounding Quan Ba is filled with an abundance of geological history owed to the region's vast evolutionary past.

The legend of the Twin Mountains – local lore surrounding two perfectly identical mountains that spring up from rice paddies – is linked to the cultural history of the Mong and Dao peoples.

The 80-kilometer route from Yen Minh District to Dong Van District is crammed with switchbacks over towering mountains and past some of Vietnam’s most jaw-dropping scenery.

Along the way, visitors will see Mong villages line the road and filled with traditional homes and rock fences.

Due to a shortage of water and limited arable land, the Mong and other ethnic minorities in Ha Giang have developed a rock-hole soil farming technique that allows them to grow corn.

Rock-hole soil farming utilizes soil in rock holes and rocks to protect the crops. This helps prevent erosion and enables rock holes to be converted into arable land.

Lung Ho Commune is a must-see for travelers along this route.

Visitors will be able to expand their horizons from Lung Ho to ponder the stunning valleys and the alluring village of locals nestled in the spectacular mountains.

The most impressive landmarks along this route are the famous Tu San Canyon, which is Vietnam's deepest alley, the Ma Pi Leng Pass, and Lo Lo Chai Village.

Travelers can also stop at Lung Cu flagpole on top of the Dragon Mountain, Vietnam's northernmost landmark and a popular check-in location for young Vietnamese tourists, as well as the Thanh Nien Xung Phong Monument, which commemorates the touching story of the martyrs who sacrificed themselves for the construction of Happiness Road.

Vacationers to Lo Lo Chai Village can enjoy a cup of Ca Phe Cuc Bac, which means 'the northernmost café,' at the 200-year-old local café.

Technically, the café is not Vietnam's northernmost point but sipping coffee in an ancient house is a must during a visit to Ha Giang.

According to Nguyen Minh Nam, manager of Tom's homestay, before the COVID-19 pandemic hit Vietnam in 2020, 90 percent of visitors to Du Gia were international tourists.

However, the composition of tourists has shifted.

Now, the majority of visitors are domestic, with 60 percent hailing from Vietnam's southern provinces.

The final round of a police command, shooting, and martial arts competition kicked off in Hue Citadel on Monday 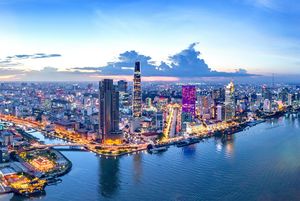