A bakery in Hanoi is making a splash in the local foodie community thanks to its special sandwiches inspired by the Vietnamese national flag.

Tran Thu Huong and Do Ngoc Duy, co-founders of Cyburger by Homekekery in the capital’s Hai Ba Trung District, created the special sandwiches as a homage to the country’s inspirational display of unity and national spirit in the face of the COVID-19 pandemic.

“We wanted to create something that would be both meaningful to Vietnamese citizens and promote the image of our country to the world,” Huy told Tuoi Tre News.

As bakers, Huy and Huong felt it was their duty to keep the country’s national spirit alive through food.

“People already know about banh mi, but ours makes it easy to show that it’s a dish from Vietnam,” Huy explained.

“That’s the main motivation for us to create our special sandwich and name it 'Banh Mi To Quoc' (Homeland Banh Mi).”

Vietnamese banh mi has been making a name for itself in foodie scenes across the world over the past few years, earning listings in several famous dictionaries, including the Oxford English Dictionary which defines banh mi as “a sandwich consisting of a baguette (traditionally baked with both rice and wheat flour) filled with a variety of ingredients, typically including meat, pickled vegetables, and chili.”

In Vietnam, the most common banh mi is the ‘banh mi thit nguoi’ -- sandwich stuffed with pâté, Vietnamese mayo, cold cuts, and vegetables.

Cyburger’s is filled with options that include pâté, fried pork fat, chicken, beef, and fried egg with onion.

Though it offers a fantastic flavor, the best part of Cyburger’s ‘Banh Mi To Quoc’ is the stark contrast of the golden yellow star placed atop the red loaf of bread.

“At first, we did not know what ingredients we could use to make red breads,” said Tran Huong.

“We tried red dragon fruit but weren’t really satisfied with the pink color it produced.

“We then tried a few more ingredients before settling on beetroots.

“After that, it still took several tries before we realized that adding a bit of gac fruit powder was the best way to ensure each loaf came out the perfect shade of red.”

In other to maintain quality and color, the sandwich for ‘Banh Mi To Quoc’ is baked at a lower temperature than typical banh mi.

“We want to inspire patriotism and pride in Vietnamese so we make sure to use flavors that our customers are familiar with,” Huong shared about the flavors of her ‘Banh Mi To Quoc.'

“Our sandwiches all taste just like a family meal cooked by mom, whether it’s the beef braised with ginger, chicken, or pâ é.”

Huong and Huy are planning to add more fillings to their menu in the near future, all of which will be inspired by the country’s traditional dishes. 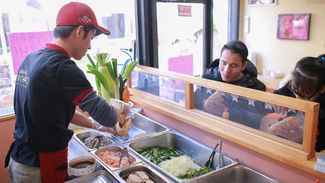 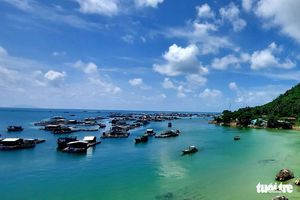