Located along the Vam Thuat River, the nearly-300-year-old Phu Chau Temple was recognized as an architectural and artistic relic by the Ho Chi Minh People’s Committee in 2014.

The temple was built in the early 19th century and, before 1975, it was a particularly well-known pilgrimage site for the city’s residents.

Since its restoration in 1992, the temple has become a magnificent blend of modern building materials used to reflect ancient designs associated with Vietnamese and Chinese culture.

The south-facing temple is comprised of three buildings connected by a courtyard.

Its roof is covered with turquoise-glazed ying-yang tiles and the architecture inside the temple features exquisite ceramic mosaic art.

Thong Tay Hoi Communal House is the oldest of its kind in Vietnam’s entire southern region.

This communal house was built in around 1698 when Ho Chi Minh City was still known as Gia Dinh Province.

Back in 1944, when Hanh Thong Tay and An Hoi villages were merged into one, the communal house became a mutual place of worship for the two villages and was named Thong Tay Hoi Communal House.

The communal house underwent major restorations in 1896 and 1927, its structure and the building materials are now almost the same as when they were in the 18th and 19th centuries.

The most unique architectural feature of the communal house is its main hall, which is comprised of two buildings with four pillars each.

The roof of the main hall features a green-glazed ceramic statue of two dragons fighting for a pearl.

Hanh Thong Tay Cathedral was constructed at the request of Denis Le Phat An, an uncle of Queen Nam Phuong - wife of Vietnam’s last king Bao Dai, in the style of Byzantine architecture.

The graves of Le Phat An and his wife still sit in the cathedral as a way to commemorate their contributions to Hanh Thong Tay’s parishioners.

The interior of the cathedral is elaborately decorated.

The walls and ceilings of the cathedral are decorated with mosaic tiles.

Aside from the religious places mentioned above, visitors to Go Vap should not miss An Hoi Bronze Burner Casting Village.

Bronze casting in Saigon reportedly dates back to the 18th century when two artisans from Thua Thien-Hue in central Vietnam traveled to Phu Lam area (District 6 now) to develop the craft there before settling in An Hoi village.

An Hoi, at its height, had over 30 local households which casted bronze, most of whom had moved to the south from the central region in Vietnam.

Up to now, around four to five households have maintained bronze casting businesses and have passed it down to their children.

Bronze casting is a difficult, entirely manual process, and the dedication An Hoi villagers have for the craft brings the village an immense amount of value. 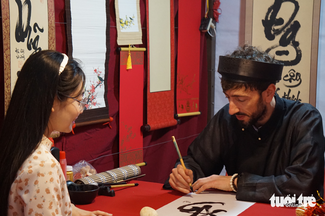 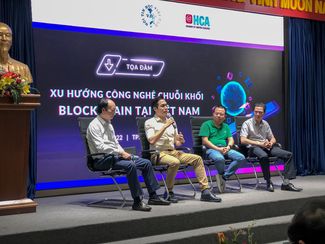 Since returning to Vietnam, Huy Nguyen has spent his time as the CEO of KardiaChain – a blockchain technology startup which he co-founded