A Ho Chi Minh City doctor is speaking out against widespread claims that people living in apartment buildings where one or more residents have tested positive for COVID-19 face a heightened risk of catching the disease through the building’s ventilation system.

According to P.M.D.T., head of the management board of the Tam Phu Apartment Building Complex in Thu Duc City, there have been several cases of COVID-19 detected on the premises, many involving residents living in units directly above and below each other with bathroom exhaust fans connected to the same outlet.

According to T., widespread speculation in the building that the SARS-CoV-2 virus can spread through the air between each resident’s bathroom has prompted many to cover their exhaust fans and blockade their toilet bowl after each use.

“I’ve heard experts say that the coronavirus is an airborne pathogen, so should we close off the vent in apartments to prevent infection through the air?” D.T. questioned.

“If a COVID-19-positive patient lives in the building, should we seal off the main door of their unit? How can we effectively prevent virus spread in the block?”

Speaking with Tuoi Tre (Youth) newspaper, Le Quoc Hung, head of the department for tropical diseases at Cho Ray Hospital in Ho Chi Minh City, explained that the spread of COVID-19 depends on wind conditions and there is currently no evidence proving the pathogen is able to travel between units in a building through the ventilation system.

According to Hung, the only real danger for COVID-19 being spread in such a manner would be between two adjoining rooms in the same unit.

In an open-air setting, the viral load from one person would hardly be sufficient to infect another, not to mention the temperature and humidity levels that might be too extreme for the virus to transmit.

What Hung does recommend, however, is that apartment management boards seal the front doors of units where positive cases have been detected, as well as vents that open into hallways or directly into other apartments, in order to prevent contagion.

Patients in these flats should also keep their windows open as much as possible and do their best to avoid the use of air conditioners. All residents in the building should do the same. 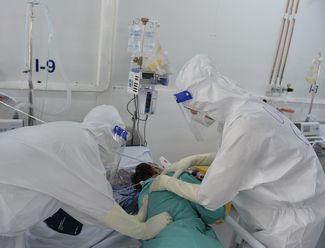