As the rainy season comes to an end and the city begins to dry up, stomachs all over Ho Chi Minh City begin to growl for rice porridge – a local comfort food found in nearly every Saigon neighborhood.

Rice porridge, or chao, is a staple of the Vietnamese diet, beloved by many for its low price and wholesome flavor.

Enjoyed for breakfast, lunch, dinner, or even a late-night sidewalk snack, many agree that chao huyet is best served at sidewalk eateries with plastic stools alongside other diners eagerly slurping away at spoonfulls of the copper-colored porridge.

Chao huyet is cooked in a clear broth made from braised pig bones, ginger, spring onion, and pig organs. Unlike other versions of chao, the ingredient list for chao huyet isn’t particularly complicated.

Aside from rice and its rich broth, the only other ingredients are Chinese donut sticks and cooked blood pudding.

Among the countless chao huyet stalls scattered across Ho Chi Minh City, the 40-year-old chao huyet stall owned by Phan Thi Thu Hong on the corner of Nguyen Huu Hao Street in District 4 is a contender for the city’s cheapest bowl of porridge.

The chao huyet at Hong's stall is served in an antique bowl with a traditional Asian soup spoon. To eat, diners need only pull up a tiny plastic stool to sit on and toss the blood pudding, bean sprouts, and Chinese donut sticks into the broth.

Phan Thi Thu Hong, 52, the owner of the stall, learned how to make chao huyet from her mother and claims her family has been selling porridge on Nguyen Huu Hao street for over 40 years.

"My customers include both children and adults.

"I am able to make a living without raising my price. I have a lot of customers with disabilities or who don’t make very much money, so I like that I can feed them a full meal for just VND5,000," Hong said.

Though many of Hong’s customers are local regulars, positive reviews on various websites have led to an increase in diners from all across the city at Hong’s stall.

"I first learned about [Hong’s chao huyet] from food review websites, so I decided to give it a try. Now, I’ve been one of her customers for a long time.

"The price is extremely low, but the quality is excellent. The porridge is sweet, and the atmosphere is nostalgic. It usually takes me several bowls of porridge to feel full," shared Nguyen Thi Thuy May, a resident of District 6.

"I bring my kids to eat here once a week. The price is low, but the flavor is rich and quite different from other stalls. I usually eat four to five bowls by myself.

"There have been many times where I’ve got her a bit late and Hong has already sold out. Yesterday, I got lucky because there were exactly four bowls left for my family," said Vu Thuan Trieu, a resident of District 8. 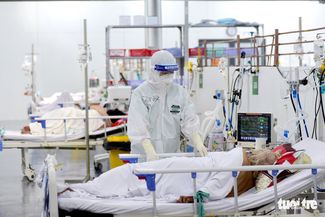