Vietnam cuisine: No matter what 'pho' you crave, try it and you’ll like it!

Editor's note: The story below is written by Pham Doan Tien Dung, a Vietnamese living in Ho Chi Minh City, in response to Tuoi Tre News' discussion on pho in the north and south of Vietnam. It was edited by Tuoi Tre News for clarity, consistency, and coherence.

As a southerner having lived in Ho Chi Minh City for most of my life, southern pho absolutely gets my preferential treatment.

My go-to pho restaurant is Pho Nga, which is located in the suburbs of Ho Chi Minh City. As usual, the aromatic smell of pho arouses my appetite prior to entering the shop. As a herb-lover, there is nothing more exciting than having a steaming hot pho served in front of me together with piles of herbs. Relishing Pho Nga gives me a chance to season the soup to satisfy my taste with a squeeze of lime and chili sauce, which is my kind of thing.

Pho is arguably a world-class cuisine that the majority of Vietnamese people always take pride in. Generally, a massive influx of tourists who take a trip to Vietnam often wish to give pho a go. This is probably because pho has special broth which is simmered throughout a long period of time with a unique recipe that is exclusive to Vietnam.

According to some ancient narratives, pho officially originated in the north of Vietnam, then it was brought to the south by northerners. However, the northern and southern regions of Vietnam have completely distinct tastes, with the former leaning toward savory while the latter has a strong preference for sweetness. Pho, therefore, does not remain the same as it was in the north when making its way to the other side of the country; instead, it has been modified to fit the taste of southerners.

Northern pho features a salty taste and is served with steaming hot broth together with flat rice noodles. The highlight of pho in the north is the purity of the soup, making it stand out from other varieties. You have hardly ever seen a bowl of [northern] pho which has fat floating on it, while seeing fatty soup in southern pho is such a norm.

Pho in the south is far from frugal. It is truly a combination of savory, piquancy, sourness, and a greater deal of sweetness.

Cooking pho can be considered as an art. Before being served, the broth is stewed with beef bone and spices such as ginger and cinnamon. This process takes so long to culminate. The fact is that the longer the chef simmers the soup, the more scrumptious it is going to be. In addition, the soup is a so-called soul of pho, which has a vital role to play in deciding the success or failure of the dish.

Having enjoyed more than 200 bowls of pho not merely in Hanoi but also in Saigon, I do not see a point in comparing which one is precisely better. It heavily depends on your taste. If you are in favor of pho which puts a great emphasis on purity and savory, northern pho is definitely your must-try. By contrast, southern pho would irresistibly hold a special place in your heart if you have a sweet tooth. Anyway, no matter what pho you ever crave, try it and you’ll like it! 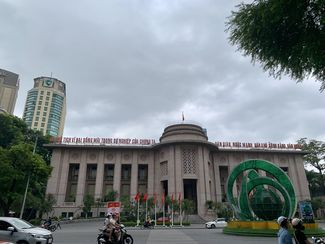